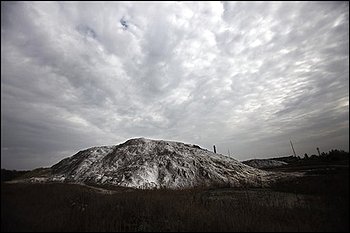 This Oct. 14, 2009 photo shows a mountain of chemical ash in Gorlovka, Ukraine. In an era of climate change and carbon trading, Ukraine, ironically, is profiting from the smokeless smokestacks of its industrial shutdown. (AP Photo/John McConnico) (John Mcconnico - AP)

KONSTANTINOVKA, Ukraine – Vladimir Gapor is a plumber by trade, but now he’s a scavenger, prying bits of scrap steel from the ruins of his old factory and selling them for a pittance.

For others beyond this manufacturing graveyard, however, Ukraine’s economic collapse has produced a potential multibillion-dollar bonanza. In an era of climate change regulation and carbon trading, Ukraine, ironically, is profiting from the smokeless smokestacks of its industrial shutdown.

How well and how long it will profit is an under-the-radar issue complicating negotiations for a worldwide climate accord being sought at a 192-nation conference in Copenhagen next month.

Gapor’s old factory, which made glass for the Soviet military and space program, shut down in the early 1990s after the Soviet Union disintegrated. Private wrecking crews and desperate jobless people like Gapor then turned the town’s industries, which once employed 16,000 workers, into heaps of bricks.

In the days when Ukraine was a Soviet republic, Konstantinovka was a booming town of 100,000 with 25 factories. Concert music filled its Palace of Culture, its workers were rewarded with trips to Crimea’s beaches, and its children with stays at mountain “pioneer camps.” Today just five workshops still operate, and the population is down to 60,000, many unemployed having migrated to Moscow, Kiev or Western Europe to find jobs, leaving families behind.

The surrounding province in eastern Ukraine, plagued by bad management and lack of investment, has lost 10 percent of its population, said Vladimir Morozov, an environmental engineer in the regional capital, Donetsk. Wealthy oligarchs, not communists, now rule the economy, he said, and they show no interest in rebuilding a wretched backwater.

The industrial collapse has been bad for jobs but good for the climate. Ukraine produces less than half the greenhouse gases it did 20 years ago, and under a trading system devised in the negotiations for the 1997 Kyoto Protocol, curbing the gases blamed for global warming, it is allowed to sell credits for every ton of carbon dioxide saved.

Countries or companies that cannot meet commitments to reduce emissions can buy these “allowances” from those that have cut emissions more than required and have a surplus to sell. Point Carbon, a Norwegian-based consulting firm, estimates 9 billion allowances are available, mostly in Russia.

Earlier this year, each one-ton allowance sold for $10 when Ukraine signed a $300 million deal with Japan. The Kiev government has almost 1 billion more tons to put on the market, said Irina Stavchuk of the National Ecological Center of Ukraine.

“The hot air business is the main goal of the government,” Stavchuk said.

Income from such deals is supposed to be earmarked for clean-energy and other “green” projects. But critics have questioned how well that guideline is followed.

While Western industrial powers must cut carbon emissions, and many developing nations are asked to shift to low-carbon economic growth, a few Eastern European countries have little incentive to constrain their polluting, since they’re already far below emissions limits.

In a way, these nations have the best of both worlds. They can make millions selling carbon credits, while enjoying a comfortable cushion to pump carbon dioxide into the atmosphere without worrying about energy efficiency or cleaning up their factories.

But the credits could lapse in 2012, when the Kyoto Protocol expires. Russia, Ukraine and other beneficiaries want these pollution rights extended in the new deal to be struck at Copenhagen. Other countries want to redress what they believe is an unfair loophole. Carbon traders, meanwhile, fear the weight of hot air credits will drive down market prices sharply.

As part of a new climate treaty, Ukraine is being asked to commit to a ceiling on emissions and it has pledged to emit 20 percent less in 2020 than it did in the benchmark year of 1990. Since its current emissions are about 52 percent below 1990, it will be left with plenty of credits to sell.

Last week Russia, the biggest holder of hot air credits, increased its pledged 2020 target to as much as 25 percent below 1990 – about where its emissions are today.

“We have to get rid of this hot air problem because it really threatens the environmental integrity of the whole system,” said Sven Harmeling, a climate expert for the nonprofit group Germanwatch.

But a solution will be hard to find at Copenhagen when countries have so much at stake, Harmeling said.

The billion-dollar diplomatic debate in the Danish capital seems a world away from grimy Konstantinovka, where ex-plumber Gapor chipped away at concrete blocks, plucking out steel reinforcement rods to sell at 1 hryvnia, or 12 cents, per kilogram (2.2 pounds).

“We need to survive somehow,” he said.

Nearby, crusading local journalist Vladimir Berezin climbed onto a mound of rubble.

“We call this place the Cemetery of Communism,” he said. A dozen 180-meter-tall (590-foot-tall) smokestacks stood like memorial obelisks over the devastation. The entrance to an abandoned building bore the slogan honoring Vladimir Lenin, founding father of the Soviet Union: “Our Aim is Communism and the Ideas of Lenin are Immortal.”