Support Russian fossil fuel ban! Letter to President of the Congress of Local and Regional Authoritiesof the Council of Europe

Ukrainian Climate Network, NGO Ecoclub and NGO Ecoaction addressed in an open letter to the leaders of the European Union with a request to stop buying gas, coal and oil from Russia. The text of the letter is below. 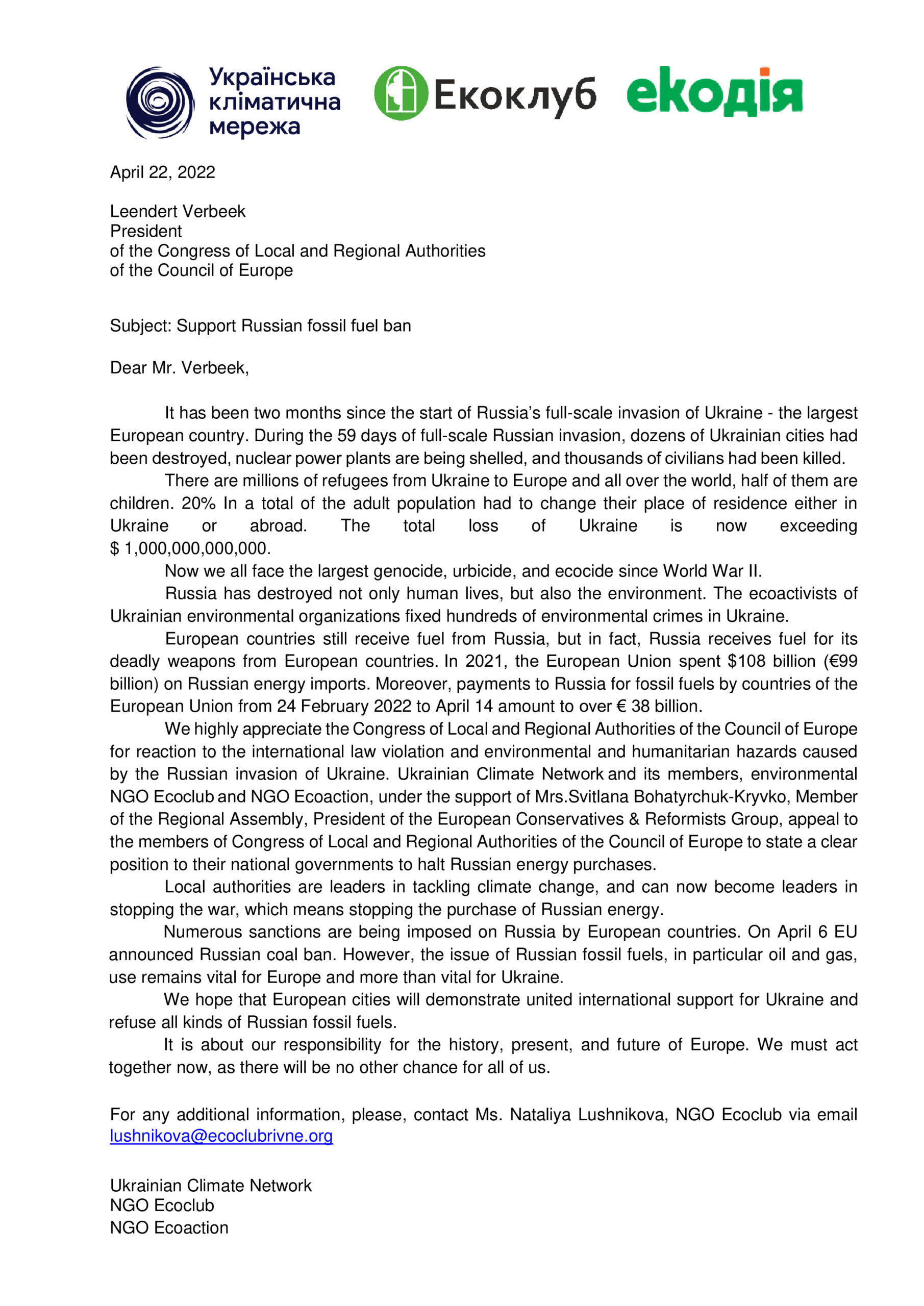 It has been two months since the start of Russia’s full-scale invasion of Ukraine – the largest European country. During the 59 days of full-scale Russian invasion, dozens of Ukrainian cities had been destroyed, nuclear power plants are being shelled, and thousands of civilians had been killed.

There are millions of refugees from Ukraine to Europe and all over the world, half of them are children. 20% In a total of the adult population had to change their place of residence either in Ukraine or abroad. The total loss of Ukraine is now exceeding  $ 1,000,000,000,000.    Now we all face the largest genocide, urbicide, and ecocide since World War II.   Russia has destroyed not only human lives, but also the environment. The ecoactivists of Ukrainian environmental organizations fixed hundreds of environmental crimes in Ukraine.  European countries still receive fuel from Russia, but in fact, Russia receives fuel for its deadly weapons from European countries. In 2021, the European Union spent $108 billion (€99 billion) on Russian energy imports. Moreover, payments to Russia for fossil fuels by countries of the European Union from 24 February 2022 to April 14 amount to over € 38 billion.  We highly appreciate the Congress of Local and Regional Authorities of the Council of Europe for reaction to the international law violation and environmental and humanitarian hazards caused by the Russian invasion of Ukraine.

Ukrainian Climate Network and its members, environmental NGO Ecoclub and NGO Ecoaction, under the support of Mrs.Svitlana Bohatyrchuk-Kryvko, Member of the Regional Assembly, President of the European Conservatives & Reformists Group, appeal to the members of Congress of Local and Regional Authorities of the Council of Europe to state a clear position to their national governments to halt Russian energy purchases.

Local authorities are leaders in tackling climate change, and can now become leaders in stopping the war, which means stopping the purchase of Russian energy.  Numerous sanctions are being imposed on Russia by European countries. On April 6 EU announced Russian coal ban. However, the issue of Russian fossil fuels, in particular oil and gas, use remains vital for Europe and more than vital for Ukraine.    We hope that European cities will demonstrate united international support for Ukraine and refuse all kinds of Russian fossil fuels.   It is about our responsibility for the history, present, and future of Europe. We must act together now, as there will be no other chance for all of us.