Tax Ministry: Some $250 million in state funds allocated to fraudulent companies in 2014 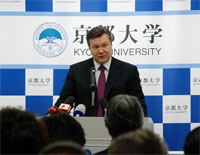 Ukraine’s use of funds obtained under the carbon trading scheme has long been under the spotlight. Allegations of misuse of so-called Kyoto money dogged ex-Prime Minister Yulia Tymoshenko, who was imprisoned for more than two years after an abuse-of-office conviction derided as politically motivated.

Under overthrown President Viktor Yanukovych’s government, the scale of alleged corruption related to these funds only increased. Now fresh evidence suggests schemes developed during his years in power threaten to derail Ukraine’s transition to a more democratic and less corrupt future.

According to an April 29 letter from Ukraine’s Ministry of Taxes and Revenue to the Finance Ministry, almost three billion hryvnia ($250 million) earmarked for ecological projects in Ukraine in 2014 is designated for fictitious companies. A campaign is now under way to block the transactions and investigate the agency responsible for assigning the contracts.

The letter, a copy of which was obtained by the Kyiv Post, reveals that contracts totaling 2.9 billion hryvnia were signed between 2012 and 2014 with 11 companies for the execution of so-called “green projects.” Responsibility for distributing the funds lies with Derzhekoinvest, a state-owned enterprise created in 2011 as the executive arm of Ukraine’s State Environmental Investment Agency (SEIA), which holds tenders for the projects.

A campaign headed by the National Ecological Centre of Ukraine (NECU), a non-profit NGO, aims to prevent the transactions from taking place and create a more transparent tender system. The NECU has the backing of Yuriy Derevyanko, head of the subcommittee on fighting corruption in the Ukrainian parliament, who is working to bring those responsible for misusing state funds to account.

The Finance Ministry has already blocked all transfers to Derzhekoinvest and an investigation into its activities has begun.
“Real people stand behind those contracts and agreements. This is a systemic problem, and immediate steps must be taken. I have turned to the prime minister and the general prosecutor’s office to put a stop to this process and cancel all agreements and contracts,” Derevyanko said at a briefing on June 23.

The 2.9 billion hryvnia is part of some 4.7 billion hryvnia that Ukraine in 2009 received from the sale of 47 million Assigned Amount Units (AAUs); 44 million of these were sold to Japan and 3 million to Spain.

AAUs are units of exchange in the carbon trading scheme introduced under the Kyoto Protocol which allows countries with higher carbon emissions to purchase the right to release more greenhouse gas from those with lower emissions. Transition economies of Central and Eastern Europe and the former Soviet Union built up large surpluses of AAUs as industry slumped during the 1990s.

Under the terms of the contract, the money must be spent on projects aimed at reducing emissions. These include energy conservation works on buildings and measures to increase renewable energy production. 817 so-called “green investments” were approved across Ukraine as part of the agreement.

However, neither the tender scheme under which the government allocates funds for these projects nor the nature of the projects themselves are open to the public. Details which have emerged suggest that large sums of money due to be paid this year were assigned under Yanukovych to shady companies tied to members of the then-president’s government.

According to a 2012 article in Ukrainska Pravda, three of the companies implicated – Sodetel, Antis Trade and Stroyinvest 2007 – have ties to Yuriy Ivanyushchenko, a businessman and close friend of Yanukovych’s, and Oleksandr Yanukovych, the ex-president’s son. Together, they received 1.2 billion of the 2.9 billion hryvnia of state contracts.

One case cited in the documents concerns a 286 million hryvnia payment for replacement street lamps to Tekhbudtsentr, a company with no registered employees. Another assigns Hr 361 million for renovation of social infrastructure to Lifebuilding, a company with authorized capital of Hr 2,000 and one registered employee.
Between May and July 2013, the NECU visited a number of places across Ukraine to conduct audits into ecological projects approved under the scheme. Its results, compiled in a report available on the centre’s website, reveal that few of the projects were cost-efficient and many had not been completed on time.

The NECU is now pressing for the abrogation of existing contracts and the introduction of a more transparent tender process. A key element in its efforts is an amendment to Resolution 221, a decree passed in 2008 which defines the provisions under which contracts for ecological projects are assigned.

“I believe the information which is hidden is significant, and it is in someone’s interest to make sure it stays that way. Without approval from state organs this flawed scheme would not exist,” NECU spokesman Andrey Zheleznyi says.

The agreement made with Japan stipulates that a technical audit must be carried out following the completion of each project. However, according to Zheleznyi no details have been disclosed, and his requests for access to this information from the SEIA have been denied.

Meanwhile, an investigation has begun into the SEIA’s activities. A review was conducted into Derzhekoinvest’s tenders between 2011 and 2012 and the first quarter of 2013 and a series of clear violations found, the press service of the general prosecutor’s office told the Kyiv Post. The case has been referred to the Interior Ministry’s investigative committee, it added. The Interior Ministry could not be reached for comment.

“There’s no basis to the Finance Ministry’s claims about these companies. This year alone we’ve had 20 inspections from the General Prosecutor’s Office, the Finance and Tax Ministries and the Interior Ministry. They have found no violations. We are ready to gather the heads of these companies in one room and provide the Finance Ministry with official proof that they have the money, the people and the expertise to carry out all projects assigned to them,” Pysarenko says.

Pysarenko insists that thorough inspections are conducted into all companies involved in Kyoto money tenders, and each stage of the process is carefully monitored.
Project proposals are assessed by members of various government ministries before an approved package is sent to Japan and Spain, he explains. The list is then returned to Ukraine and signed by heads of the Ministries of Finance and Ecology, before being forwarded to the Prime Minister’s office for official approval. Only after receiving the prime minister’s signature can the funds be disbursed to Derzhekoinvest.

According to Pysarenko, the package of projects for 2014-2015 was approved by then-Prime Minister Mykola Azarov on Feb 10. Four days later the Finance Ministry authorized the release to SEIA of 1.77 billion hryvnia, or what remained of the 4.7 billion received by Ukraine in 2009.

However, following the EuroMaidan Revolution and the appointment of a new government on Feb 27, the package had to be reviewed once again.

“We received a letter from the Finance Ministry on April 1 requesting an updated version of the project list, which we submitted. On May 7 the package was approved by (Prime Minister Arseniy) Yatsenyuk, excluding projects planned for Crimea. We have still not received that money,” he says.

He adds that the SEIA is ready and willing to cooperate with the NECU’s efforts to bring more transparency to the tender process.

“We support Mr. Zheleznyi’s initiative and we are ready to cooperate with his plans to amend Resolution 221,” he says.

Ukraine’s use of money obtained from carbon trading has long been under the spotlight. A series of criminal cases which led to the imprisonment in 2011 of former Prime Minister Yulia Tymoshenko included an investigation into her alleged use of Kyoto funds to finance pensions. Under Yanukovych, it appears the scale of embezzlement only increased.

The latest reports have already provoked a reaction from Japan. In April, Ukraine’s Minister of Ecology and Natural Resources Andriy Mokhnyk said that Tokyo had demanded the funds be returned.

“The agreement itself stipulates $800 million but no funds were moved in three months. Thus, Japan has already announced its issues and readiness to break off the agreement and to stop cooperation,” Mokhnyk told Interfax at the time.

It appears an ultimatum has already been issued. If the money is not allocated by December it will have to be returned to Japan and Spain, according to both Pysarenko and Zheleznyi. This will be a serious blow to the already overstretched state budget.

Furthermore, even if Ukraine manages to return the unused or misallocated funds it will recoup only one quarter of the AAUs it sold – under the terms of the agreement the country receiving emission quotas keeps 75 percent of these units.

In the meantime, Derevyanko and the NECU’s campaign to recover the money in Derzhekoinvest’s possession continues.

“If we don’t prevent the planned transactions from taking place, including blocking their transfer through legal means, then we will suffer from that. We will be allowing Yanukovych’s legacy to continue at a time when Yanukovych is no longer here,” Derevyanko says.